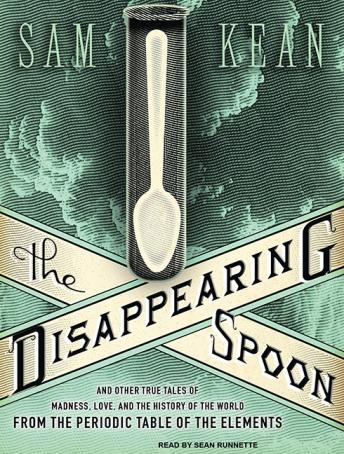 The Disappearing Spoon: And Other True Tales of Madness, Love, and the History of the World from the Periodic Table of the Elements

The periodic table is one of man's crowning scientific achievements. But it's also a treasure trove of stories of passion, adventure, betrayal, and obsession. The infectious tales and astounding details in The Disappearing Spoon follow carbon, neon, silicon, and gold as they play out their parts in human history, finance, mythology, war, the arts, poison, and the lives of the (frequently) mad scientists who discovered them.

We learn that Marie Curie used to provoke jealousy in colleagues' wives when she'd invite them into closets to see her glow-in-the-dark experiments. And that Lewis and Clark swallowed mercury capsules across the country and their campsites are still detectable by the poison in the ground. Why did Gandhi hate iodine? Why did the Japanese kill Godzilla with missiles made of cadmium? And why did tellurium lead to the most bizarre gold rush in history?

From the Big Bang to the end of time, it's all in The Disappearing Spoon.

Disappearing Spoon: And Other True Tales of Madness, Love, and the History of the World from the Periodic Table of the Elements