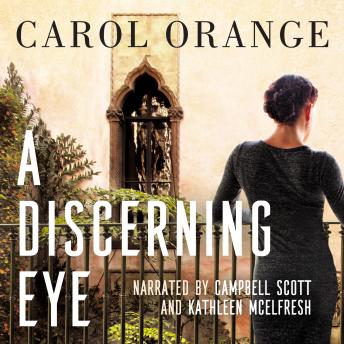 Art dealer Portia Malatesta is devastated when she learns that thirteen works of art were robbed from Boston's Isabella Stewart Gardner Museum. To help uncover the whereabouts of the artwork, she sets out to construct a psychological profile of the thief. By analyzing the common theme linking the stolen pieces, she suspects the mastermind behind the heist is obsessed with the interplay of dark and light - not only in art, but also in life.

The FBI enlists Portia's help in a high stakes sting operation to recover the stolen works of art - a dangerous proposition that will take her to Colombia, where she'll have to earn the trust of a notorious drug lord's married daughter. Risking everything, Portia must navigate the underworld of Medellin- a complicated web of politics, pride, and ugly crimes - where a single misstep could have deadly consequences.

Inspired by history's largest art heist, A Discerning Eye is a fast-paced, skillfully plotted journey in which the fate of some of the world's most prized masterpieces depends on one woman's perceptive cunning.