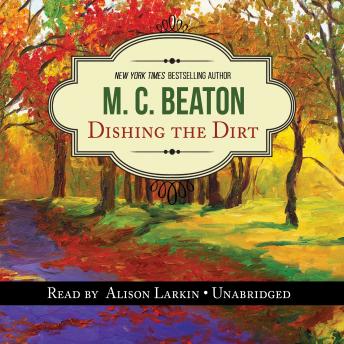 New York Times bestselling author M. C. Beaton’s beloved Agatha Raisin is back and finds that she must prove her own innocence when a local therapist turns up dead.

When therapist Jill Davent moved to the village of Carsely, Agatha Raisin was not a fan. Not only was this therapist romancing Agatha’s ex-husband, she dug up details of Agatha’s not-too-glamorous origins. Jill also counsels a woman, Gwen Simple, that Agatha firmly believes assisted her son in some grisly murders, although there is no proof. Not one to keep her feelings to herself, Agatha tells anyone who will listen that Jill is a charlatan and better off dead. Agatha can only sigh with relief when the therapist takes an office in Mircester.

When Agatha learns that Jill had hired a private detective to investigate her background, she barges into Jill’s office and gives her a piece of her mind, yelling, “I could kill you!” So when Jill is found strangled to death in her office two days later, Agatha becomes the prime suspect. But Agatha, along with her team of private detectives, is determined to prove her innocence and find the real culprit. This time Agatha must use her skills to save her own skin.

With Dishing the Dirt, M. C. Beaton proves that “once you meet Agatha Raisin, you’ll keep coming back” (New York Journal of Books).

“A private detective continues her search for love in all the wrong places…As usual, Agatha attracts and forfeits the attentions of a number of eligible bachelors while hunting a clever killer; a basket full of red herrings makes this one of her more interesting cases.”—Kirkus Reviews