Disintegration: The Splintering of Black America 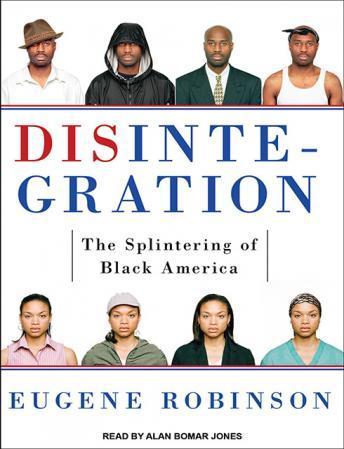 The African American population in the United States has always been seen as a single entity: a 'Black America' with unified interests and needs. In his groundbreaking book Disintegration, longtime Washington Post journalist Eugene Robinson argues that, through decades of desegregation, affirmative action, and immigration, the concept of Black America has shattered. Now, instead of one, there are four distinct groups: a Mainstream middle-class majority with a solid stake in society; a large Abandoned minority with less hope than ever of escaping poverty; a small Transcendent elite, whose enormous wealth and power make even whites genuflect; and newly Emergent groups of mixed-race individuals and recent black immigrants who question what black even means.

Using historical research, reporting, census data, and polling, Robinson shows how these groups have become so distinct that they view each other with mistrust and apprehension. And yet all are reluctant to acknowledge division. Disintegration shines light on crucial debates about affirmative action, the importance of race versus social class, and the ultimate questions of whether and in what form racism and the black community endure.

Disintegration: The Splintering of Black America