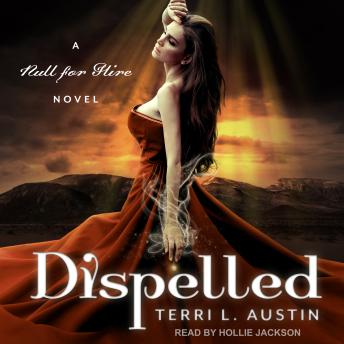 They call me an abomination. A mutant. A curse on their kind. I don't let it bother me. Much.

My name is Holly James, and what they say is true. I'm a freak of nature-a null. My mere presence zaps the magic from Others, rendering them powerless. That's why they hate me. But here's the kicker: I've found a way to profit from my lack of mojo.

Whether it's acting as a mystical wet blanket in a dispute between pyromancers or keeping hormonal shifters from changing during a sweet sixteen party, I provide a highly specialized service. For a hefty fee.

When a young witch turns up dead, clutching an amulet cursed with black magic, my estranged grandfather asks for my help. In return for nullifying the necklace, Gramps promises to find my missing mother-a witch who vanished after my birth. Of course there's a catch. He wants me to assist Cade McAllister, the arrogant sorcerer in charge of investigating the case.

Cade resents my existence, let alone my attempts to help. Still, I'll do whatever it takes to find my mom. For my own peace of mind I have to know what happened to her, and I won't allow anything to get in my way.