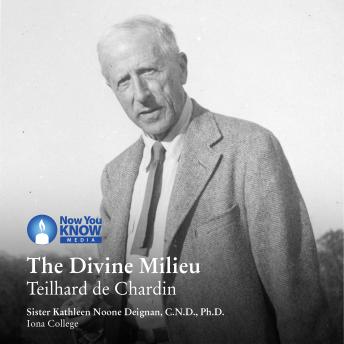 "At the heart of our universe, each soul exists for God, in our Lord. "
- Pierre Teilhard de Chardin (The Divine Milieu)

Take an unforgettable retreat with Teilhard de Chardin's masterpiece: The Divine Milieu. A Jesuit priest and scientist, Teilhard's powerful vision of the universe has influenced countless spiritual seekers. Written in the 1920's but published posthumously, The Divine Milieu is a spiritual work at once cosmic and personal. Mapping the horizons of transcendence and intimacy, it illuminates the boundless contours of our true nature and home in God.

Now, this retreat invites you to reflect upon Teilhard's timeless thought. Presented by gifted professor, Teilhard expert, and author, Sr. Kathleen Deignan, C. N. D. , this 6-conference series will transform your spiritual imagination and cosmic consciousness. An accomplished musician, Sr. Deignan weaves her beautiful, acclaimed music in with her profound exploration of The Divine Milieu. You are invited to nurture the "cosmic contemplative," deepen your Christic life, and serve the world with greater enlightenment and soul.

In this retreat, you will explore the profound paradoxes of Teilhard's evolutionary spirituality. Orienting you through the landscape and inscape of the Sacred, Teilhard will challenge you to visit the mystical terrain of your cosmic neighborhood. Illumined by his wisdom, you will venture on an itinerary he walked before us.

With the spiritual master Teilhard as your guide, you will encounter the sacred dimensions of the evolving cosmos and the interior terrain of the evolving human soul. (Photograph courtesy of the Foundation of Teilhard de Chardin)

This title is due for release on March 13, 2015
We'll send you an email as soon as it is available!