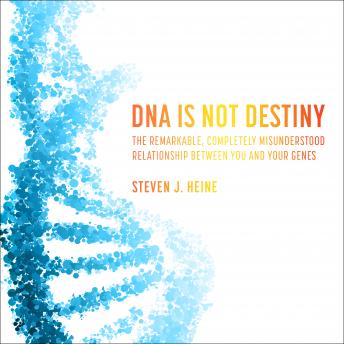 DNA Is Not Destiny: The Remarkable, Completely Misunderstood Relationship between You and Your Genes

Around 250,000 people have had their genomes sequenced, and scientists expect that number to rise to one billion by 2025. Professor Steven J. Heine argues that the first thing we will do on receiving our DNA test results is to misinterpret them completely. Despite breathless (often lightly researched) media coverage about newly discovered 'cancer' or 'divorce' or 'IQ' genes, the prospect of a DNA test forecasting how your life is going to turn out is vanishingly small.

In DNA Is Not Destiny, Heine shares his research?and his own genome sequencing results?to not only show what your genes can actually tell you about your health, intelligence, ethnic identity, and family but also highlight the psychological biases that make us so vulnerable to the media hype. Heine's fresh, surprising conclusions about the promise, and limits, of genetic engineering and DNA testing upend conventional thinking and reveal a simple, profound truth: your genes create life?but they do not control it.

Listened to this after getting shocking news from Ancestry DNA result- that my dad was not my biological father, finding out at age fifty was a lot to take in. This book covers a lot of topics related to genetics but would highly recommend.