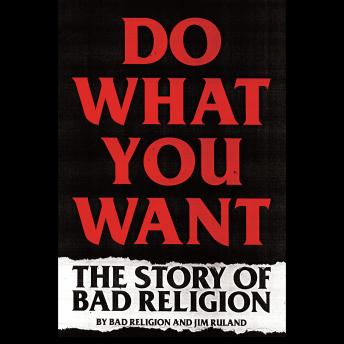 Do What You Want: The Story of Bad Religion

From their beginnings as teenagers experimenting in a San Fernando Valley garage dubbed 'The Hell Hole' to headlining major music festivals around the world, DO WHAT YOU WANT tells the whole story of Bad Religion's forty-year career in irreverent style.DO WHAT YOU WANT's principal storytellers are the four voices that define Bad Religion: Greg Graffin, a Wisconsin kid who sang in the choir and became an L.A. punk rock icon while he was still a teenager; Brett Gurewitz, a high school dropout who founded the independent punk label Epitaph Records and went on to become a record mogul; Jay Bentley, a surfer and skater who gained recognition as much for his bass skills as for his antics on and off the stage; and Brian Baker, a founding member of Minor Threat who joined the band in 1994 and brings a fresh perspective as an intimate outsider. With a unique blend of melodic hardcore and thought-provoking lyrics, Bad Religion paved the way for the punk rock explosion of the 1990s, opening the door for bands like NOFX, The Offspring, Rancid, Green Day, and Blink-182 to reach wider audiences. They showed the world what punk could be, and they continue to spread their message one song, one show, one tour at a time.

Do What You Want: The Story of Bad Religion