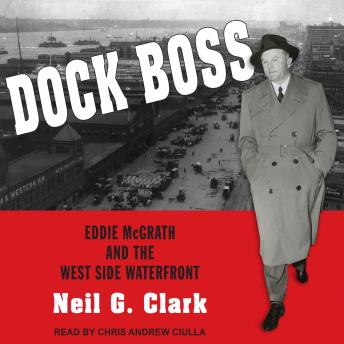 Dock Boss: Eddie McGrath and the West Side Waterfront

Dock Boss: Eddie McGrath and the West Side Waterfront is the fascinating account of one gangster's ascension from altar boy to the leader of New York City's violent Irish Mob.

Eddie McGrath's life and crimes are traced through the tail-end of Prohibition, the gang warfare of the 1930s that propelled him into the position of an organized crime boss, the sordid years of underworld control over the bustling waterfront, McGrath's involvement in dozens of gangland murders, and finally the decline of the dock mobsters following a period of longshoremen rebellion in the 1950s.

Like walking into the backroom of a smoky West Side tavern, the book also features all the other unsavory characters who operated on the waterfront, including McGrath's brother-in-law, John 'Cockeye' Dunn; the gang's hitman of choice, Andrew 'Squint' Sheridan; racketeers such as Mickey Bowers, Timothy O'Mara, Charlie Yanowsky, Joe Butler and Albert Ackalitis; as well as a plethora of corrupt union officials, robbers, enforcers, shakedown artists, loan sharks, boss loaders, and bookies.

This is the real-life story of the preeminent racketeer on Manhattan's lucrative waterfront and the bloodshed that long haunted the ports of New York City.