Doctor Who And The Auton Invasion 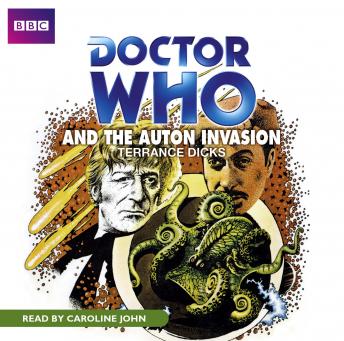 In this, the first adventure of his third incarnation, Doctor Who, Liz Shaw and the Brigadier grapple with the nightmarish invasion of the Autons. Living, giant-sized, plastic-modelled ‘humans’ with no hair and sightless eyes, they are waxwork replicas and tailors’ dummies whose murderous behaviour is directed by the Nestene Consciousness – a malignant, squid-like monster of cosmic proportions and indescribably hideous appearance. Caroline John, who played Liz Shaw in the original Doctor Who TV serial ‘Spearhead from Space’, reads Terrance Dicks’ complete and unabridged novelisation, first published by Target Books in 1974. ‘BBC Audiobooks has chosen well with its books and has taken the right approach with its readers... they benefit from new music and sound effects’ - Doctor Who Magazine.

Doctor Who And The Auton Invasion