Doctor Who And The Creature From The Pit 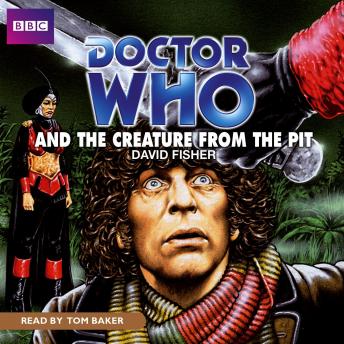 The planet Chloris is very fertile, but metal is in short supply and has therefore become extremely valuable. A huge creature, with most unusual physical properties, arrives from an alien planet which can provide Chloris with metal from its own unlimited supplies, in exchange for chlorophyll. However, the ruthless Lady Adrasta has been able to exploit the shortage of metal to her own advantage, and has no wish to see the situation change. The Doctor and Romana land on Chloris just as the creature’s alien masters begin to lose patience over their ambassador’s long absence. The action the aliens decide to take will have devastating consequences for Chloris, unless something is done to prevent it... Tom Baker, who played the Fourth Doctor in the BBC TV series, reads David Fisher’s complete and unabridged novelisation, first published by Target Books in 1975. ‘BBC Audiobooks has chosen well with its books and has taken the right approach with its readers... they benefit from new music and sound effects’ - Doctor Who Magazine.

Doctor Who And The Creature From The Pit