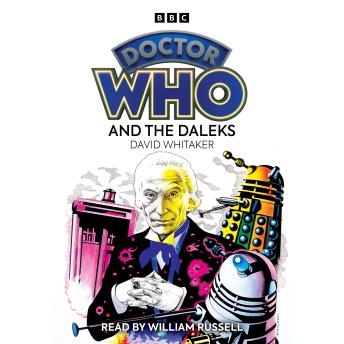 Doctor Who And The Daleks

The mysterious Doctor and his granddaughter Susan are joined by unwilling adventurers Ian Chesterton and Barbara Wright in an epic struggle for survival on an alien planet. In a vast metal city they discover the survivors of a terrible nuclear war - the Daleks. Held captive in the deepest levels of the city, can the Doctor and his new companions stop the Daleks' plan to totally exterminate their mortal enemies, the peace-loving Thals? More importantly, even if they can escape from the Daleks, will Ian and Barbara ever see their home planet Earth again? This novelization is based on the second Doctor Who story which was originally broadcast from 21 December 1963-1 February 1964. It features the First Doctor as played by William Hartnell, and his companions Susan, Ian and Barbara. William Russell, who played Ian in the original TV serial on which this book is based, reads David Whitaker's complete and unabridged novelisation, first published by Target Books in 1973. 'They’re well-written books-adventure stories, of course, but with some thought… the creation of the character of the Doctor had a touch of genius about it.’ - Westminster Press.

Doctor Who And The Daleks