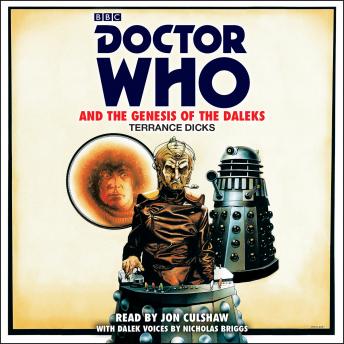 Doctor Who and the Genesis of the Daleks: 4th Doctor Novelisation

The place: Skaro
Time: The Birth of the Daleks

After a thousand years of futile war against the Thals, the scientist Davros has perfected the physical form that will carry his race into eternity: the dreaded Dalek. Without feeling, conscience or pity, the Dalek is programmed to exterminate all lifeforms it deems inferior.

At the command of the Time Lords, the Doctor, Sarah and Harry travel back through time in an effort to totally destroy this terrible menace of the future. But as events spiral out of control in horrific ways, it becomes clear that even the Doctor cannot always win...

Jon Culshaw reads Terrance Dicks’s complete and unabridged novelisation, based upon the 1975 TV serial by Terry Nation, first published by Target Books in 1976.

Doctor Who and the Genesis of the Daleks: 4th Doctor Novelisation