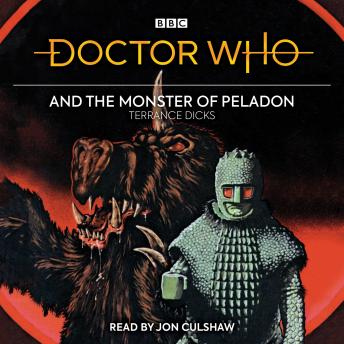 Doctor Who and the Monster of Peladon: 3rd Doctor Novelisation

Jon Culshaw reads this exciting novelisation of a classic TV adventure for the Third Doctor, featuring the Ice Warriors.

Fifty years after his first visit to Peladon, the Doctor returns to find that Queen Thalira has inherited a troubled kingdom from her father.

Membership of the Galactic Federation was expected to bring peace and prosperity to the planet, but the spirit of the sacred monster Aggedor is once more spreading terror and death.

The Doctor uncovers a treacherous plot to steal the mineral wealth of Peladon, and is again confronted by his old enemies - the Ice Warriors.

Doctor Who and the Monster of Peladon: 3rd Doctor Novelisation