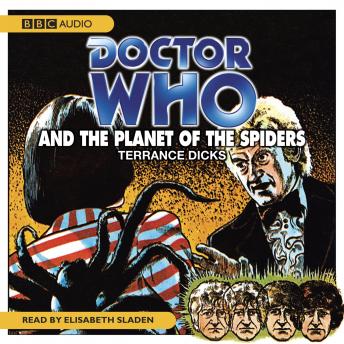 Doctor Who and the Planet of the Spiders

‘It’s happening, Brigadier! It’s happening!’ Sarah cried out. The Brigadier watched, fascinated, as the lifeless body of his old friend and companion, Doctor Who, suddenly began to glow with an eerie golden light... The features were blurring, changing... ‘Well, bless my soul,’ said the Brigadier. ‘WHO will he be next?’ The last exciting adventure of Doctor Who’s third incarnation. Elisabeth Sladen, who played Sarah Jane Smith in the original TV serial on which this book is based, reads Terrance Dicks’ complete and unabridged novelisation, first published by Target Books in 1975. 'BBC Audiobooks has chosen well with its books and has taken the right approach with its readers... they benefit from new music and sound effects' - Doctor Who Magazine.

Doctor Who and the Planet of the Spiders