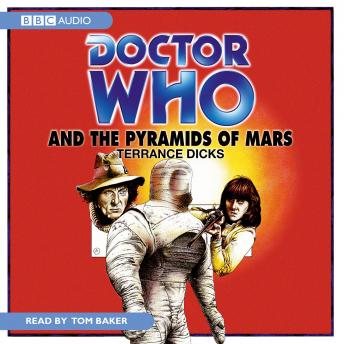 Doctor Who And The Pyramids Of Mars

The mind of Sutekh the Destroyer is consumed with jealousy and hatred. Convinced that all living things are his mortal enemy, he is determined to annihilate all forms of life throughout the universe. Imprisoned at the heart of an Egyptian pyramid, the force of his maniacal evil has been paralysed for centuries. But now, after thousands upon thousands of years of long captivity, the moment of deliverance has arrived. Sutekh's vicious megalomania is about to be unleashed upon the world - unless the Doctor succeeds in outwitting a mind so powerful it can force him to his knees and torture him at a glance... Tom Baker, who played the Fourth Doctor in the BBC TV series, reads Terrance Dicks' complete and unabridged novelisation, first published by Target Books in 1976. 'BBC Audiobooks has chosen well with its books and has taken the right approach with its readers... they benefit from new music and sound effects' - Doctor Who Magazine.

Doctor Who And The Pyramids Of Mars