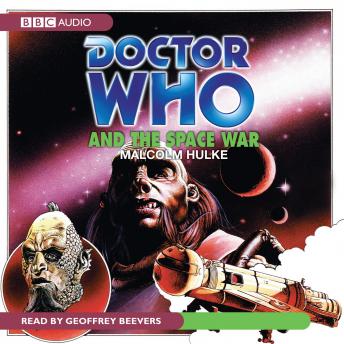 Doctor Who And The Space War

‘Doctor!’ screamed Jo. ‘Look at that thing. It’s coming straight at us!’ A small, black spaceship, about a mile away, was approaching rapidly. It had no lights, no markings. But some instinct told Jo that the tiny craft meant danger. The year is 2540, and two powers loom large in the Galaxy - Earth and Draconia. After years of peace, their spaceships are now being mysteriously attacked and cargoes rifled. Each suspects the other and full-scale war seems unavoidable.The Doctor, accused of being a Draconian spy, is thrown into prison. And only when the Master appears on the scene do things really begin to move... Geoffrey Beevers, who played an incarnation of the Master in the classic BBC TV Doctor Who series, reads Malcolm Hulke’s complete and unabridged novelisation, based on the TV adventure 'Frontier in Space' and first published by Target Books in 1976. ‘BBC Audiobooks has chosen well with its books and has taken the right approach with its readers... they benefit from new music and sound effects’ - Doctor Who Magazine

Doctor Who And The Space War