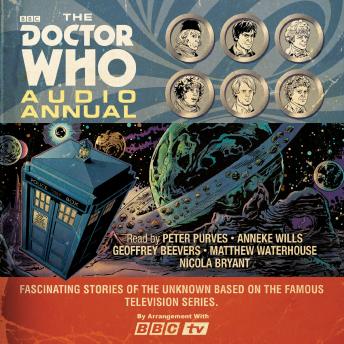 For two decades, from the mid-1960s to the mid-1980s, every fan of the Doctor hoped to find The Doctor Who Annual in their Christmas stocking. Larger than life and twice as colourful, the stories within were exuberant — and often charmingly naive — in their take on ‘the children’s own programme which adults adore’.

In The Sons of Grekk, the First Doctor is held prisoner in a brutal, otherworldly society. The King of Golden Death finds that the Second Doctor, Polly and Ben have materialised inside an Ancient Egyptian pyramid. The Third Doctor, Jo and the Brigadier confront a familiar adversary in Dark Intruders, whilst in Conundrum the Fourth Doctor, Adric and K9 experience warped physics in the corridors of the TARDIS. FacingThe Penalty, a delirious Fifth Doctor finds old friends and adversaries ganging up on him, and the Sixth Doctor and Peri plunge into a dangerous period of British history in The Real Hereward.

Also included are two vintage essays on the character of our favourite Time Lord: Who is Doctor Who? from 1966 and The Phoenix in the TARDIS from 1968.

Take a nostalgic journey through time with these vintage Doctor Who tales.