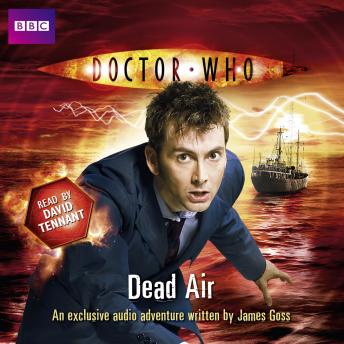 ‘Hello, I’m the Doctor. And, if you can hear this, then one of us is going to die.’ At the bottom of the sea, in the wreck of a floating radio station, a lost recording has been discovered. After careful restoration, it is played for the first time – to reveal something incredible. It is the voice of the Doctor, broadcasting from Radio Bravo in 1966. He has travelled to Earth in search of the Hush – a terrible weapon that kills, silences and devours anything that makes noise – and has tracked it to a boat crewed by a team of pirate DJs. With the help of feisty Liverpudlian Layla and some groovy pop music, he must trap the Hush and destroy it – before it can escape and destroy the world... Written specially for audio by James Goss and read by David Tennant, Dead Air features the Doctor as played by David Tennant in the acclaimed hit series from BBC Television. It was crowned 'Best Audiobook of the Year 2010' in a public vote hosted by The Audiobook Store.