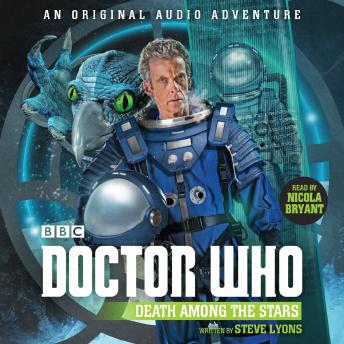 Doctor Who: Death Among the Stars: 12th Doctor Audio Original

At Kennedy Space Centre, in 2060, the Doctor meets Amber Lewis. Both are there to observe the launch of Earth’s very first off-world colony ship, as it heads for Jupiter’s sixth moon. But to everyone’s surprise it seems that somebody has reached Europa before them. The figure is oddly familiar to the Doctor and Amber in particular…

So begins the adventure of a lifetime for Amber, as she journeys in the TARDIS to set foot on a distant moon. Events take a bizarre turn when she and the Doctor apparently witness celebrity figures wandering freely on the rocky surface. A sinister presence lurks behind the apparitions, and Amber is about to fall into its clutches.

An alien base, a stranded abductee and a group of sinister ‘Icemen’ all add up to trouble for the Doctor. Can he rescue his new friend and avert disaster on humanity’s new frontier?

Nicola Bryant, who played the Doctor’s companion Peri in Doctor Who in the 1980s, reads this original audiobook by Steve Lyons, based on the hit BBC TV series.

Doctor Who: Death Among the Stars: 12th Doctor Audio Original