Doctor Who: Death Comes To Time 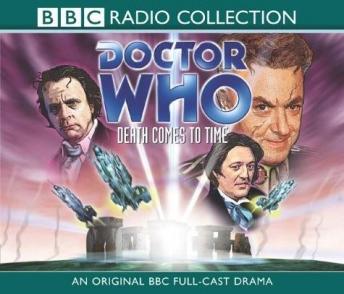 'Even Time Lords die...' When a dissident Time Lord group inadvertently caused the destruction of an entire civilisation through interference, its members vowed to repent by serving the Universe not as gods of Time but as mere men. Many years later, this peaceful resolve is severely tested when two of their number are killed - and the Doctor's seventh incarnation becomes embroiled in the struggle against the apperently unstoppable General Tannis. Plagued by ominous portents, the Doctor and his companion Antimony must race across the Universe, taking in the Santine Republic, the Great Orion Nebula and the frozen heart of the Canisian Empire. Meanwhile the mysterious Minister of Chance battles his own inner demons, and former TARDIS traveller Ace finds herself in training for a destiny she never dreamed possible. Matters reach a terrible climax when Tannis' next target for subjugation is identified. Exactly how much is the Doctor prepared to sacrifice in order to save Earth? First webcast on BBCi and also featuring Jon Culshaw, Anthony Stewart Head and Jacqueline Pearce, Death Comes to Time is an original audio adventure uniting elements from the Doctor's past with bold and original ideas for his future.

Doctor Who: Death Comes To Time