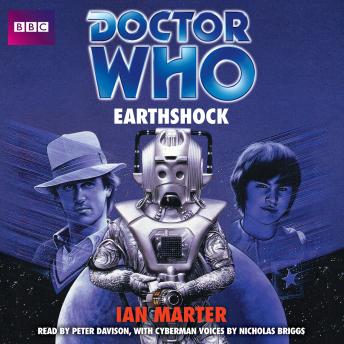 A group of palaeontologists have been savagely attacked while carrying out a study of fossilised dinosaur remains in an underground cave system on twenty-fifth century Earth. A party of troopers and Professor Kyle, the only survivor of the attack, are investigating the deaths of her colleagues when they discover the Doctor and his companions at the site of the massacre. The time-travellers are immediately suspected. In trying to establish their innocence and find out who – or what – was responsible for the killings, the Doctor is confronted by an old enemy... The Fifth Doctor himself, Peter Davison, reads Ian Marter’s complete and unabridged novelisation, first published by Target Books in 1983, whilst Nicholas Briggs provides the authentic voice of the Cybermen.