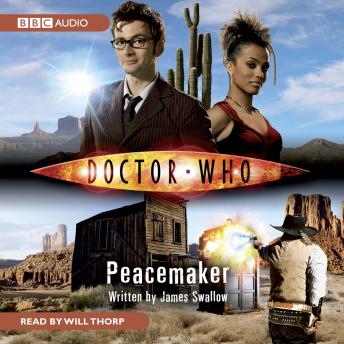 The peace and quiet of a remote homestead in the 1880s American West is shattered by the arrival of two shadowy outriders searching for ‘the healer’. When the farmer refuses to help them, they raze the house to the ground using guns that shoot bolts of energy instead of bullets... In the town of Redwater, the Doctor and Martha learn of a snake-oil salesman whose patent medicines actually cure his patients. But when the Doctor and Martha investigate, they discover the truth is stranger, and far more dangerous. Caught between the law of the gun and the deadly plans of intergalactic mercenaries, the Doctor and Martha are about to discover just how wild the West can become... Featuring the Doctor and Martha as played by David Tennant and Freema Agyeman in the hit series from BBC Television, ‘Peacemaker’ is read by Will Thorp, who played Toby Zed in the TV episodes ‘The Impossible Planet’ and ‘The Satan Pit’.