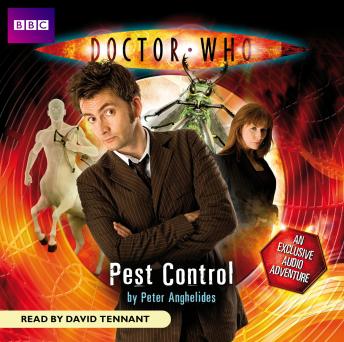 The TARDIS is lost in battle on a distant planet. When the Doctor sets off in pursuit, Donna is left behind, and finds herself accepting a commission in the Pioneer Corps. Something is transforming soldiers into monstrous beetles, and she could be the next victim. Meanwhile, the Doctor steals a motorbike and stages a jailbreak. Well, how hard can it be to find the TARDIS, rescue Donna, and negotiate a peace? But that’s before the arrival of a brutal and remorseless mechanical exterminator, bent on wiping out the insects. It may be that nothing can stop it, because this robot’s solution for the infestation is very simple: kill everything. Featuring the Doctor and Donna, as played by David Tennant and Catherine Tate in the hit series from BBC Television, this story has been written specially for audio, and is read by David Tennant.

This title is due for release on May 5, 2008
We'll send you an email as soon as it is available!