Doctor Who: Prisoner Of The Daleks 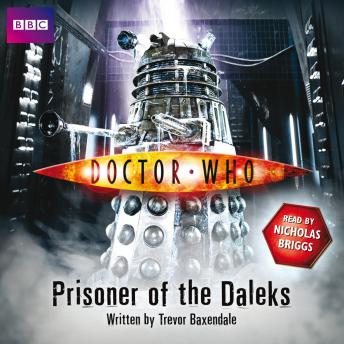 The Daleks are advancing, their empire expanding into Earth’s space. The Earth forces are resisting in every way they can. But the battles rage on across countless solar systems. And now the future of our galaxy hangs in the balance... The Doctor finds himself stranded on board a starship near the frontline with a group of ruthless bounty hunters. Earth Command will pay them for every Dalek they kill, every eye stalk they bring back as proof. With the Doctor’s help, the bounty hunters achieve the ultimate prize: a Dalek prisoner - intact, powerless and ready for interrogation. But where the Daleks are involved, nothing is what it seems, and no one is safe. Before long the tables will be turned. How will the Doctor survive when he becomes a prisoner of the Daleks? Featuring the Doctor as played by David Tennant in the hit BBC series, Prisoner of the Daleks is read by Nicholas Briggs, who is the voice of the Daleks on television.

Doctor Who: Prisoner Of The Daleks