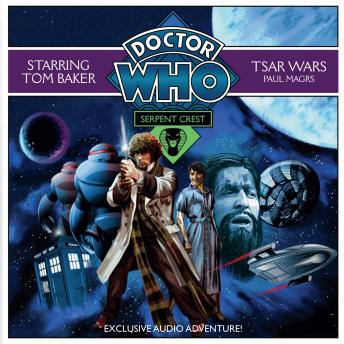 In a distant galaxy, the Tsar and Tsarina rule over the Robotov Empire from the safety of their palace, whilst human workers tend the power plants on satellite moons. When the Doctor arrives with Mrs Wibbsey, his identity is immediately mistaken, and the Tsarina believes that her old ally, Father Gregory, has returned. But when the Palace comes under attack, the Tsar suspects him of treachery. Meanwhile, Mrs Wibbsey discovers that dark secrets are lurking in the shadows of one satellite moon. Far more than mere human rebellion is being planned, and Father Gregory is not operating alone. His actions will set off a chain of events with long-lasting consequences for the Doctor and Mrs Wibbsey... With Tom Baker as the Doctor, Susan Jameson as Mrs Wibbsey, Michael Jayston as the Tsar, Suzy Aitchison as the Tsarina, Simon Shepherd as Boolin, Sam Hoare as Lucius, and Paul Chequer, Grant Gillespie and Gabriel Vick as the Servo Robots and the rebels, Tsar Wars is the first of five linked stories written by Paul Magrs.