Doctor Who: The Ambassadors Of Death (TV Soundtrack) 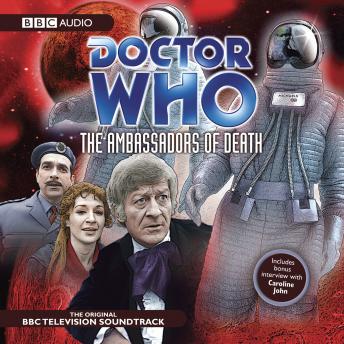 Seven months after it left the red planet, Mars Probe 7 still hasn't returned to Earth. The Doctor and Liz Shaw join the investigation as a second capsule, Recovery 7, is sent to discover what has happened. But when it returns, something is terribly wrong with its three astronauts... The space-suited figures are kidnapped and Brigadier Lethbridge-Stewart leads UNIT in a rescue attempt - whilst Liz finds herself at the mercy of dangerous fanatics. Only a solo space flight by the Doctor can break the deadlock surrounding the crew of Mars Probe 7. Closer to home, however, a deadly fear threatens a catastrophic end for the entire Earth. Jon Pertwee is the Doctor in the soundtrack of this classic 1970 BBC TV adventure, and Caroline John, who played Liz Shaw in the original episodes, provides linking narration for this exciting seven-part story. In a bonus interview she recalls the making of the TV serial, and her time on Doctor Who in general.

Doctor Who: The Ambassadors Of Death (TV Soundtrack)