Doctor Who: The Ark (TV Soundtrack) 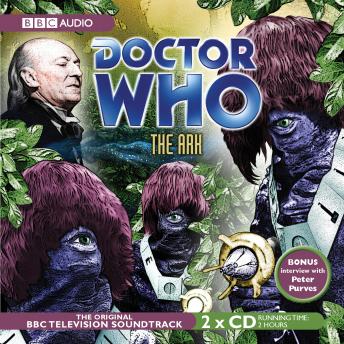 'Everything aboard this spaceship is suddenly endangered!' The TARDIS materialises in a tropical forest, and the Doctor, Steven and Dodo are surprised to find that it’s situated inside a vast spaceship. This is the distant future, and the last survivors from Earth are on a 700 year voyage to the planet Refusis II. Accompanying them are their mute, one-eyed servants: the Monoids. When Dodo unwittingly spreads her cold amongst the Monoids it proves deadly to them, and the travellers are accused of sabotage. Then the TARDIS jumps forward in time to the Ark’s future, where the Doctor and his friends make a horrifying discovery. The balance of power has shifted, and humanity is now enslaved by the vengeful Monoid race, who plan to make Refusis II their own... In an additional bonus interview, Peter Purves, who also provides linking narration for the story, recalls the making of the original 1966 television serial.

Doctor Who: The Ark (TV Soundtrack)