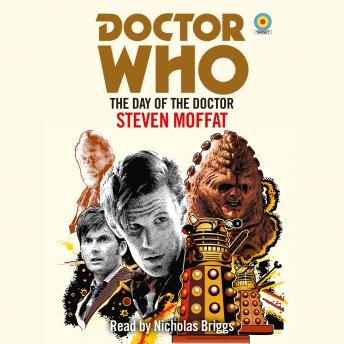 Doctor Who: The Day of the Doctor: 11th Doctor Novelisation

Nicholas Briggs reads the brand new novelisation of the spectacular 50th anniversary TV episode. When the entire universe is at stake, three different Doctors will unite to save it.

The Tenth Doctor is hunting shape-shifting Zygons in Elizabethan England. The Eleventh is investigating a rift in space-time in the present day. And one other – the man they used to be but never speak of – is fighting the Daleks in the darkest days of the Time War. Driven by demons and despair, this battle-scarred Doctor is set to take a devastating decision that will threaten the survival of the entire universe… a decision that not even a Time Lord can take alone.

On this day, the Doctor’s different incarnations will come together to save the Earth… to save the universe… and to save his soul.

Doctor Who: The Day of the Doctor first published by BBC Books in 2018

Doctor Who: The Day of the Doctor: 11th Doctor Novelisation