Doctor Who: The Day of the Troll 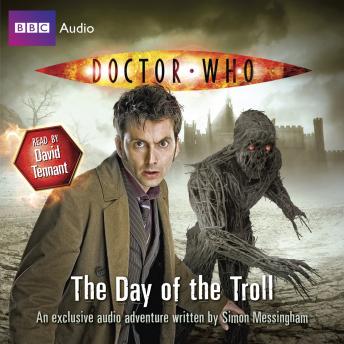 When the Doctor arrives on Earth in the far future, he is horrified to find the planet beset by famine and starvation. England is a barren wasteland, and scientists are desperately seeding the ground to make the crops grow again. But now it seems that something even worse is happening. Karl Baring, the owner of research facility The Grange, has been snatched away in the middle of the night. His sister Katy was with him when he vanished, but is now in catatonic shock - so it is up to the Doctor, with the help of the scientists at The Grange, to investigate. What is lurking under the old bridge, and why is it preying on people? The Doctor must find out, before it strikes again... Written specially for audio by Simon Messingham and read by David Tennant, The Day of the Troll features the Doctor as played by David Tennant in the acclaimed hit series from BBC Television. '... a great piece of characterisation wonderfully captured by Tennant' - Bognor Regis Observer 'Highly recommended' - Cambs Times.

Doctor Who: The Day of the Troll