Doctor Who: The Dominators (TV Soundtrack) 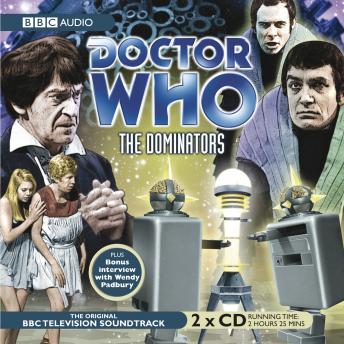 'That which threatens us we destroy!' When the TARDIS deposits the Doctor, Jamie and Zoe on the planet Dulkis, they find it newly threatened by two humanoid aliens and their robotic servants, the Quarks. The Dominators intend to turn the whole planet into a radioactive mass, as fuel for their space fleet. Whilst the Doctor and Jamie are captured and tested for intelligence by the Dominators, Zoe befriends a native named Cully – and discovers that the pacifist Dulcian Council are unlikely to strike back at the invaders. Meanwhile, the Dominators set about enslaving the Dulcians as labour for their scheme, drilling bore holes to reach the planet’s core. Can the Doctor and his friends save both the planet and its people in time? In an exclusive bonus interview, Wendy Padbury – who played Zoe – recalls the making of the original TV serial, and talks about her time in Doctor Who generally.

Doctor Who: The Dominators (TV Soundtrack)