Doctor Who: The Empty House 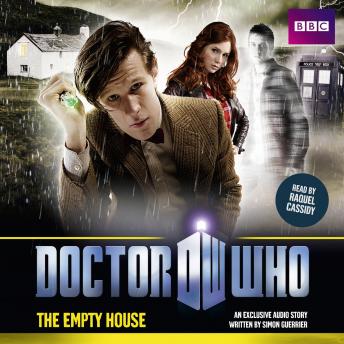 Thrown off course by a howling storm, the TARDIS lands in a bleak, desolate stretch of countryside. The Doctor deduces that it has arrived in Hampshire in the 1920s and, sniffing the air, he smells a distinct odour of sulphur - indicating that a spaceship has crashed in the area. While Rory goes to fetch an umbrella, Amy and the Doctor brave the rain to find the stricken craft. It is huge, shiny, silvery-blue - and completely empty. A set of footprints leads to a cosy-looking, old-fashioned cottage: but the house, too, is deserted. However, the Doctor and Amy can distinctly hear people talking - and one of the voices sounds like Rory's. How could he be in the cottage when he was last seen heading back to the TARDIS? Where are the residents of the empty house? And what has happened to the inhabitants of the spaceship? Written specially for audio by Simon Guerrier, The Empty House features the Doctor, Amy and Rory as played by Matt Smith, Karen Gillan and Arthur Darvill in the acclaimed hit series from BBC Television. It is read by Raquel Cassidy, who played Miranda Cleaves in the 2011 TV episodes The Rebel Flesh and The Almost People.

Doctor Who: The Empty House