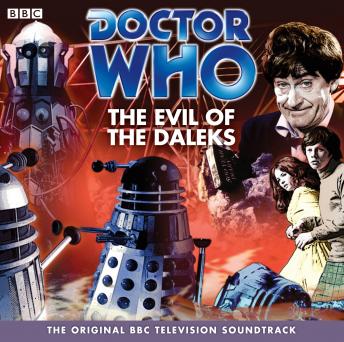 Doctor Who: The Evil Of The Daleks (TV Soundtrack)

'There is only one form of life that matters. Dalek life!' The TARDIS has been stolen from Gatwick Airport, and the Doctor and Jamie are hot on its trail. A series of cryptic clues lead them to an antiques shop owned by Edward Waterfield, and there it becomes clear that an elaborate trap has been laid for them - but by whom, and for what purpose? Only a journey back in time to the 1860s will reveal the answer... The Daleks are in search of the Human Factor, something which they believe will help their quest for universal domination. In order to achieve their aim, they need the Doctor’s help and the use of his TARDIS. Worried that his old friend may be turning traitor, Jamie discovers that he too is part of the plan - in the course of which he encounters Victoria Waterfield, a young woman who is to play a large part in his and the Doctor’s life. The Daleks’ plan has far-reaching consequences, leading to conflict and destruction of astonishing proportions. And when the TARDIS arrives on the battlefield planet of Skaro, the scene is set for an encounter between the Doctor and the malevolent Emperor Dalek... Frazer Hines, who plays Jamie in the story, narrates this classic story from 1967.

Doctor Who: The Evil Of The Daleks (TV Soundtrack)