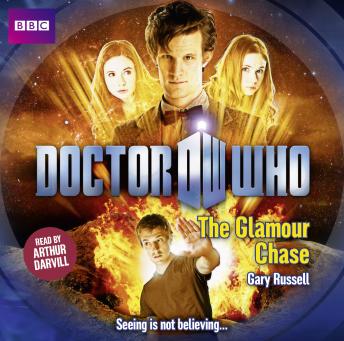 Doctor Who: The Glamour Chase

An archaeological dig in 1936 unearths relics of another time... And - as the Doctor, Amy and Rory realise - another place. Another planet. But if Enola Porter, noted adventuress, has really found evidence of an alien civilization, how come she isn’t famous? Added to that, since Amy’s been travelling with him for a while, why does she think the Doctor is from Mars? As the ancient spaceship reactivates, the Doctor discovers that nothing and no-one can be trusted. The things that seem most real could actually be literal fabrications - and very deadly indeed. Who can the Doctor believe when no one is what they seem? And how can he defeat an enemy who can bend matter itself? Read by Arthur Darvill, who played Rory in Doctor Who, this exciting adventure features the Eleventh Doctor, Amy and Rory, as played by Matt Smith, Karen Gillan and Arthur Darvill in the hit BBC TV series.

Doctor Who: The Glamour Chase