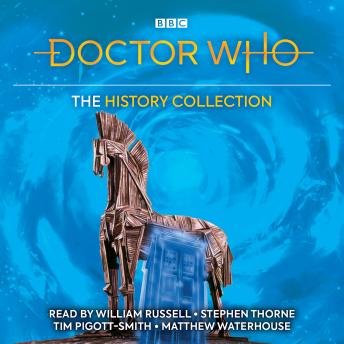 In Doctor Who: The Aztecs the First Doctor, Ian, Barbara and Susan materialise in Mexico during the bloodthirsty Aztec civilisation.

In Doctor Who and the Crusaders the First Doctor and his friends are embroiled in the 12th Century conflict between Richard the Lionheart and the Sultan Saladin.

In Doctor Who: The Myth Makers the First Doctor, Steven and Vicki arrive on the plains of Ursa Minor, in the middle of the Greek and Trojan battlefields.

In Doctor Who and the Masque of Mandragora, the Fourth Doctor and Sarah fight swords, sorcery and an alien influence in 15th Century Italy.

In Doctor Who and the Visitation, the Fifth Doctor, Adric, Tegan and Nyssa materialise in 17th Century London and find themselves playing a key role in gruesome historical events…

Doctor Who and the Crusaders
Files 16-25

Doctor Who and the Masque of Mandragora
Files 54-65

Doctor Who and the Visitation
Files 66-76