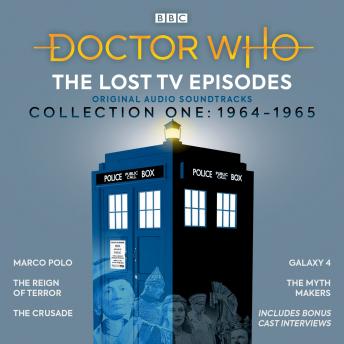 Five thrilling soundtrack adventures from the early days of Doctor Who, featuring serials lost from the TV archive.

The pictures may be lost, but each of these stories survives as a soundtrack recording. Remastered, and with additional linking narration, they can be enjoyed once more.

In Marco Polo, the famous Venetian explorer plans to give the TARDIS to Kublai Khan - unless the Doctor and his companions can stop him.

In The Reign of Terror, the Doctor, Ian, Barbara and Susan are caught up in the bloody events of the French Revolution.

In The Crusade, the TARDIS materialises in the middle of a 12th Century holy war between Richard the Lionheart and the Saracen Saladin.

In Galaxy 4, the Doctor, Steven and Vicki meet the Drahvins and the Rills on a planet just one day away from destruction.

In The Myth Makers, the Doctor is hailed as the Greek god Zeus and forced to help defeat the Trojans. He forms the idea of a wooden horse…

Special linking narration is provided by William Russell, Carole Ann Ford and Peter Purves, who also recall their time making the original episodes in a series of bonus interviews.