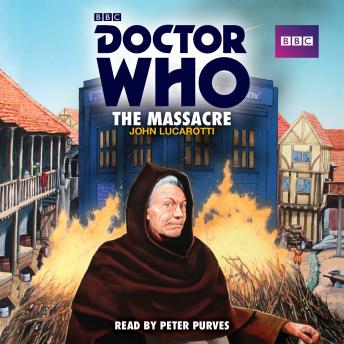 Doctor Who: The Massacre: A 1st Doctor Novelisation

Peter Purves reads John Lucarotti's novelisation of his classic First Doctor TV adventure. The TARDIS lands in Paris on 19 August 1572. Driven by scientific curiosity, the Doctor goes to meet and exchange views with the apothecary, Charles Preslin. Before he disappears, he warns Steven to stay 'out of mischief, religion and politics'. But in 16th Century Paris it is impossible to remain a mere observer, and Steven soon finds himself involved with a group of Huguenots. The Protestant minority of France is being threatened by the Catholic hierarchy, and danger stalks the Paris streets. As Steven tries to find his way back to the TARDIS he discovers that one of the main persecutors of the Huguenots appears to be...the Doctor! Peter Purves, who played Steven in the original BBC TV series, reads this novelisation of a fondly remembered classic story, the original episodes of which are lost from the BBC archives.

Doctor Who: The Massacre: A 1st Doctor Novelisation