Doctor Who: The Mind Of Evil (TV Soundtrack) 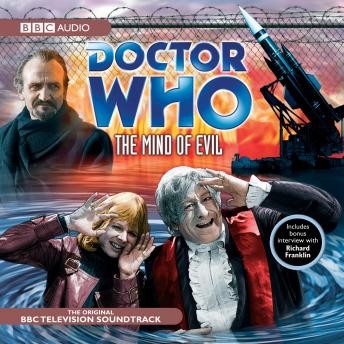 Jon Pertwee stars as the third Doctor in this soundtrack of an exciting BBC TV adventure, with linking narration by Richard Franklin. A dangerous adventure begins for the Doctor and Jo Grant when they visit Strangmoor Prison for a demonstration of the new Keller Machine. The device is said to extract negative emotions from convicted prisoners, leaving them pacified and reformed. But when it apparently goes wrong, a far more sinister purpose is revealed... The Doctor's old enemy, the Master, is behind the machine, working in conjunction with an alien mind parasite. As unrest builds amongst Strangmoor's prisoners, the Master takes control, his ultimate aim to hijack a deadly missile and threaten the World Peace Conference taking place in London. As Brigadier Lethbridge-Stewart leads UNIT in the defence of both the missile and Strangmoor, the Doctor and Jo must fight to stay alive and help avert a third world war!

Doctor Who: The Mind Of Evil (TV Soundtrack)