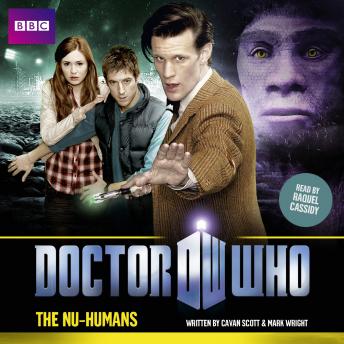 The Doctor, Amy and Rory are awe-struck by their first sight of Hope Eternal, a super-earth bigger than Earth itself with heavy gravity, volcanoes and a crust loaded with mineral deposits. But their wonder is cut short when they discover a body dumped on the ground - a huge figure with extraordinarily long arms covered in thick, purple scales. Yet the corpse is not alien: he's human, albeit unlike any human Amy and Rory have ever seen. The Nu-Humans have adapted their genes to fit their new environment, and formed a thriving colony. But now they are facing a terrible threat. Can the Doctor find out who is killing Nu-Humans and why - before he, Amy and Rory are themselves tried for murder? Written specially for audio by Cavan Scott and Mark Wright, The Nu-Humans features the Doctor, Amy and Rory as played by Matt Smith, Karen Gillan and Arthur Darvill in the acclaimed hit series from BBC Television. It is read by Raquel Cassidy, who played Miranda Cleaves in the 2011 TV episodes The Rebel Flesh and The Almost People.