Doctor Who: The Resurrection Casket 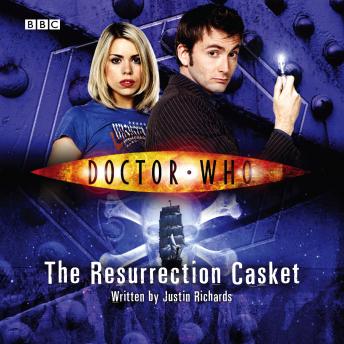 Starfall - a world on the edge, where crooks and smugglers hide in the gloomy shadows and modern technology refuses to work. And that includes the TARDIS. The pioneers who used to be drawn by the hope of making a fortune from the mines can find easier picking elsewhere. But they still come, either for the romance of it, or old-fashioned organic mining, or in the hope of finding the lost treasure of Hamlek Glint - scourge of the spaceways, privateer, adventurer, bandit... Will the TARDIS ever work again? Is Glint’s lost treasure waiting to be found? And does the fabled Resurrection Casket - the key to eternal life - really exist? With the help of new friends, and to the horror of new enemies, The Doctor and Rose aim to find out... Read by the Tenth Doctor himself, this thrilling adventure features the Doctor and Rose as played by David Tennant and Billie Piper in the acclaimed hit series from BBC Television. Also included is an exclusive bonus interview with the author, Justin Richards, compiled by David Darlington of Doctor Who Magazine.

Doctor Who: The Resurrection Casket