Doctor Who: The Romans (TV Soundtrack) 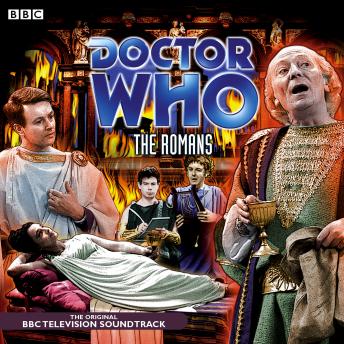 'They wouldn’t let me build my new Rome... But if the old one is burnt... Brilliant! Brilliant!' The year is 64 AD, and the TARDIS travellers are enjoying a restful time in a villa close to Rome. Their peace and quiet is shattered when a visit to the city sees the Doctor mistaken for a lyre player, and him and Vicki subsequently pursued by an assassin. Meanwhile, Ian and Barbara are kidnapped and sold as slaves: Ian on a galley in the Mediterranean Sea, and Barbara to serve in the court of Nero himself. Using all his ingenuity to gain the freedom of Nero’s court, the Doctor inadvertently inspires the Emperor’s plans to completely rebuild Rome. Can the Doctor, Vicki, Ian and Barbara escape with their lives before the city becomes a cinder? William Russell, who played Ian Chesterton in the series, provides additional linking narration, and a selection of bonus archive radio items looks at the real-life Nero, and the life and career of William Hartnell.

Doctor Who: The Romans (TV Soundtrack)