Doctor Who: The Sensorites (TV Soundtrack) 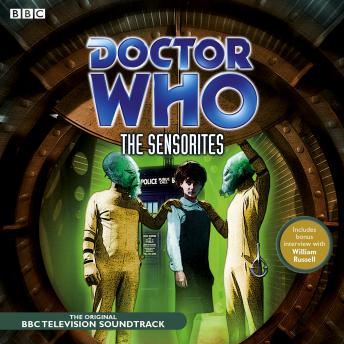 William Hartnell stars as the original Doctor in this remastered classic TV soundtrack with linking narration by William Russell. The TARDIS, carrying the Doctor, his granddaughter Susan and the two schoolteachers Ian and Barbara, materialises on board a drifting spaceship in the 28th century, in orbit around a planet called the Sense-Sphere. As the crewmembers wake from a catatonic trance, the TARDIS’s door lock is stolen by two shadowy aliens also on board. Before long the travellers encounter the Sensorites - humanoid creatures who are sensitive to bright light and loud noise. Establishing a telepathic link with Susan, they request a meeting with the Doctor and friends down on the Sense-Sphere. The Doctor discovers deep mistrust between the humans and the Sensorites, whose people are afflicted with a strange disease. When Ian also falls ill, the Doctor must discover the cause of the disease whilst also trying to make peace between the two races. William Russell, who played Ian in the story, provides linking narration for these six episodes, first broadcast in 1964. In a bonus interview he also recalls the making of the serial, and remembers his time on ‘Doctor Who’ in general.

Doctor Who: The Sensorites (TV Soundtrack)