Doctor Who: Twice Upon a Time: 12th Doctor Novelisation 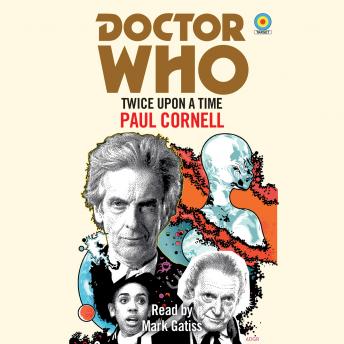 Mark Gatiss reads the brand new novelisation of the Twelfth Doctor’s dramatic final adventure. Still reeling from his encounter with the Cybermen, the First Doctor stumbles through the bitter Antarctic wind, resisting the approaching regeneration with all his strength. But as he fights his way through the snowdrifts, he comes across the familiar shape of a blue police box, and a mysterious figure who introduces himself as the Doctor…

Thrown together at their most vulnerable moments, the two Doctors must discover why the snowflakes are suspended in the sky, why a First World War Captain has been lifted from his time stream moments before his death, and who is the mysterious Glass Woman who knows their true name. The Doctor is reunited with Bill, but is she all she seems? And can he hold out against the coming regeneration?

Doctor Who: Twice Upon a Time first published by BBC Books in 2018

Doctor Who: Twice Upon a Time: 12th Doctor Novelisation