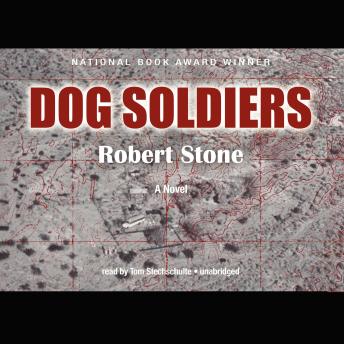 Written By: Robert B. Stone

In Saigon during the waning days of the Vietnam War, a small-time journalist named John Converse thinks he'll find action-and profit-by getting involved in a big-time drug deal. But back in the States, things go horribly wrong for him. His courier disappears-probably with his wife-and a corrupt Fed wants Converse to find them and the drugs. Or else.
Dog Soldiers is a frightening, powerful, intense novel that perfectly captures the underground mood of America in the 1970s, when amateur drug dealers and hippies encountered profiteering cops and professional killers. Stone details an American drama of greed and violence in a world where life is cheap and the price of survival dangerously high.
Winner of the 1975 National Book Award for Fiction. One of Time Magazine's Best 100 English-Language Novels from 1923-2005. A Crime Reads Pick of Novels Exploring the Vietnam War Aftermath. A BookRiot Pick of Most Celebrated and Best Vietnam War Books.

by Robert B. Stone