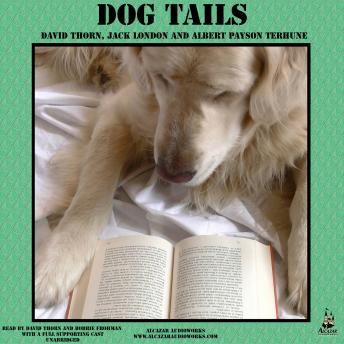 A collection of three heartwarming storiesabout man's best friend
Dollypogs
The gentle story of a Labrador puppy, Dollypogs, and her twopals, big old Jetset and little Snuggles, both adopted by Dollypog's lovingmaster, David Thorn. A very sweet and touching story about how they all cametogether and their adventures as a loving family.
Brown Wolf
Jack London was one of the first fiction writers to achieveworldwide fame. Though he is best remembered for his novels The Call of theWild and White Fang, both set during the Klondike Gold Rush, his short storiesare considered masterful. Here in "Brown Wolf," a couple living on a homesteadin Northern California who take in a stray sled dog from Alaska. A story aboutthe relationship between man and animal, "Brown Wolf" is among London's finestshorter works.
His Dog
Link Farris found Chum in a ditch by his farm with a badlybroken leg. After nursing the dog back to health, Chum became Link's inseparablecompanion, protecting him from robbers and helping him herd the farm animals.
When Link realizes what a beautiful dog Chum truly is, he decidesto enter him in a dog show, an adventure that reveals the mystery of Chum's ownership-and the battle Link must fight to keep Chum safe from harm.