The Dogs of War 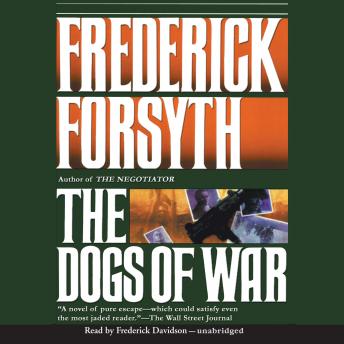 In a remote corner of Zangaro, a small republic in Africa, lies Crystal Mountain. At certain times of the day the mountain emits a strange glow. Only mining magnate Sir James Manson, a shadowy titan of London's financial district, knows why. The mountain contains ten billion dollars' worth of the world's most valuable mineral, platinum, just waiting to be exploited. Now the only question is how to get hold of it. Sir James knows how. Unleash the dogs of war.
"Knocking off a bank or an armored truck is merely crude. Knocking off an entire republic has, I feel, a certain style." Manson is scheming a coup d'état in Zangaro, a plan to invade the country with a band of savage, cold-blooded mercenaries and topple the government. The man selected to plan and carry out the mission is Cat Shannon, a thirty-three-year-old Anglo-Irishman from Nigeria. If the goal is clear, the means are not, for there are no up-to-date manuals on overthrowing governments by force. By the time he has set forth this sinister venture in all its ramifications, Frederick Forsyth has fashioned that manual and given us a classic of terror and enthrallment.

This title is due for release on March 19, 2009
We'll send you an email as soon as it is available!