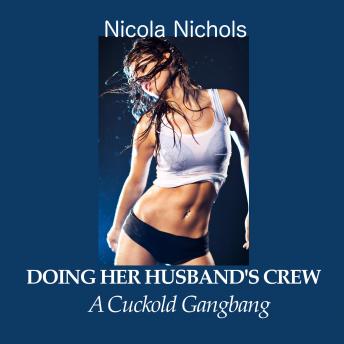 Crystal's husband Harry isn't satisfying her and the lusty looks from the hot young guys in his construction crew excite her. The foreman lets her know he wants her so she returns to the site after Harry goes to a meeting. The sex is smoking hot and when Harry goes out of town she goes back for more. After he does her, the rest of the crew join in, sweeping her up in her first gangbang.
~~~~~ PG Excerpt ~~~~~
Crystal parked her car just inside the construction site, near the front gate. Harry had bought her the expensive Mercedes as a wedding present and she wasn't about to put it in among the bulldozers and backhoes.
'I just need to give your father his briefcase,' she said.
'He always forgets things,' the ten-year-old said. 'Can I stay and listen to the radio?'
'Sure.' It was a cool morning and she wouldn't be long. It was a short walk to the trailer that served as an on-site office for Harry's construction business.
During the short walk from the car, she noticed several rough-looking guys giving her lusty looks. It made her glad she'd dressed nice. The silk blouse framed her breasts, and a bright red, tight, short skirt showed her body off; her high heels gave her legs a nice look. The crew was mostly young guys; they looked to be in their early twenties. It was shallow, but they were hot in a primitive way and she liked that her body got their attention. When a couple of them whistled at her, she felt even better. A woman who just turned thirty liked the reassurance, liked feeling she was still attractive, and interesting to young men.
A young Hispanic guy rushed up as she approached the trailer. 'Can I help you?'
She smiled at him, enjoying the sight of his rippling arm muscles. His tight tee shirt bulged with his enormous biceps. He was only a couple of inches taller than she was, but he had the confident air of a big man. 'I'm not sure if you can or not.'