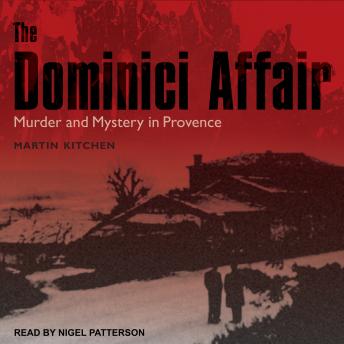 The Dominici Affair: Murder and Mystery in Provence

Sir Jack Drummond, with his wife, Lady Anne, and their ten-year-old daughter, Elizabeth, were on holiday on the French Riviera when they stopped to make camp just off the road near a farm called La Grand' Terre in Provence. The family was found murdered the next morning. More than two years later, the barely literate, seventy-five-year-old proprietor of La Grand' Terre, Gaston Dominici, was brought to trial, convicted, and condemned to death by guillotine.

When Dominici was convicted, there was general agreement that the ignorant, pitiless, and depraved old peasant had gotten what he deserved. At the time, he stood for everything backward and brutish about a peasantry left behind in the wake of France's postwar transformation and burgeoning prosperity. But with time perspectives changed.

Subsequent inquiries coupled with widespread doubts and misgivings prompted President de Gaulle to order his release from prison in 1960, and by the 1980s many in France came to believe-against all evidence-that Gaston Dominici was innocent. He had become a romanticized symbol of a simpler, genuine, and somehow more honest life from a bygone era.