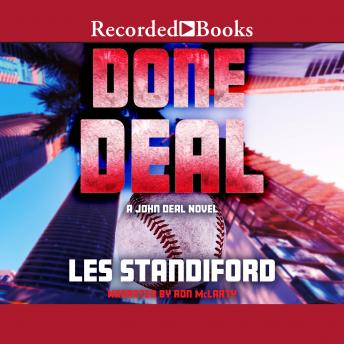 Les Standiford has won the Frank O'Connor Award for Short Fiction, and has received a National Endowment for the Arts Fellowship for Fiction. Done Deal is filled with gripping characters, unforgettable encounters and unexpected twists. As the Miami sun shines down on a brutal world of corruption and violence, Johnny Deal is salvaging what is left of his family's contracting business. His four-plex will be completed once he pays off a few more inspectors, and he is rejoicing in his wife's pregnancy. But he's about to find himself standing in the way of investors who will do anything, and eliminate anyone, that keeps them from the property they want. Fast-paced, gritty, and tough, Les Standiford's novel grabs you by the throat and shakes away all daydreams of paradise. Ron McLarty's skillful performance brings out the full range of emotional surprises and physical conflicts that assault Johnny Deal.

This title is due for release on June 24, 2011
We'll send you an email as soon as it is available!