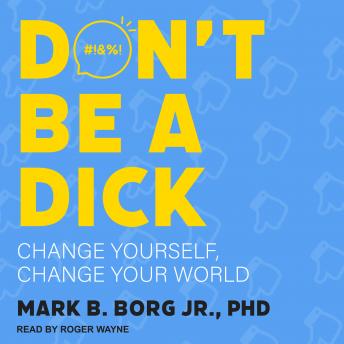 Why this book? Because you might be a dick: a mean-spirited, self-serving individual who thinks and acts as though everyone else in the world can only be understood-and whose only importance is defined-in terms of their relationship to himself or herself. That's right, herself. Because anatomical evidence aside, dicks can be women, too. Being a dick might feel powerful in the short-term, but it is probably not helping you much in the long-term, because this flawed character trait is exactly what is keeping you from attaining what you may want most: personal satisfaction, a steady job, a loving committed relationship, and/or lifelong friendships.

Anyone, at any time, can slip into being a dick-and many do. Yet Don't Be a Dick is especially for people who have noticed how their own behavior tends to backfire, leaving them feeling isolated or uncertain why their seemingly justified actions consistently have such poor results. If you're constantly using the refrain, 'It's not me, it's them,' whenever something goes wrong, Mark Borg is here to tell you that it is, in fact, you. The good news is there is something you can do to reverse these behaviors and live a happier, more fulfilling life.